How We Transformed our Children’s Playhouse into a Teenagers’ Den 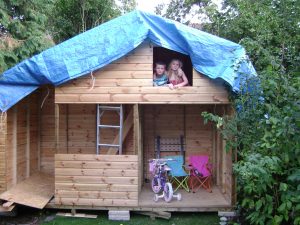 10 years ago my husband designed and built a playhouse for our then 7 year old son and 5 year old daughter. It had an upstairs den with a ladder. There were two separate rooms. We filled it with toys and cushions and dressing up clothes. We stuck pictures on the walls. We had visions […]

Annabeth, Emmy, Grace and William Love Their Playhouses. So Do We.

Lovely Day for a Picnic – What Are You Bringing?

1738 was a momentous year for the English picnic. This was the year the London department store Fortnum & Mason invented the Scotch egg (you’ll never be stuck for a conversation opener again!). Now, I am rather partial to a picnic it has to be said – although I would happily swap the Scotch eggs […]

With a Playhouse in Your Garden Everyone's a Winner

Dare we tempt fate?! After months of dreaming of long, lazy days in the garden it looks like they are finally on their way. So now’s the time to start planning ways to entice the children away from their computers and back into the garden to re-awaken their long buried interest in the outdoors.
And what better way to keep them entertained for hours, come rain or shine, than in their very own home from home – a playhouse.
The kids will love their own space outdoors, you’ll love reclaiming your own space indoors…everyone’s a winner.
So what pointers do you need to think about when buying a playhouse?